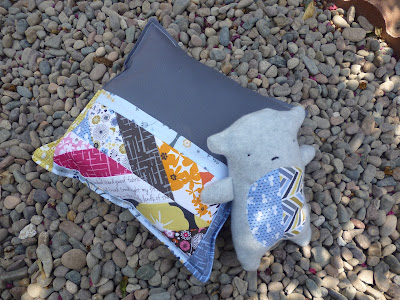 This week's project for the Zakka along is a pillowcase which features a pocket for a darling little bear. I really wanted to do this one, but I knew that I had to tweak it a bit too. My leftover scraps of Madrona Road were perfect for this piece -- I really am in love with that collection. 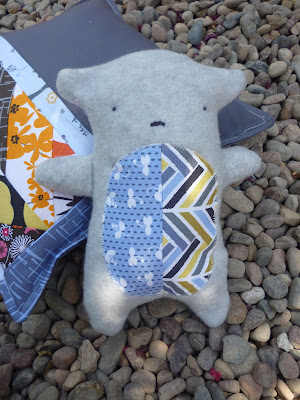 I enlarged the pattern to make Mr. Bear about 50% bigger than the original -- a better size for my girls. He's made out of leftover grey fleece from the scarves I made for the kids last winter. I also did a zig zag stitch on the tummy oval, which should hold up better with the amount of handling this little guy is going to get. 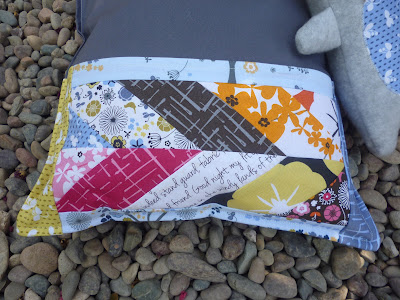 The diamonds on the prototype are beautiful, but I just didn't have the time to invest in something quite that detailed this week. I love the Madrona Road herringbone prints, so I decided to echo that in the pocket design. 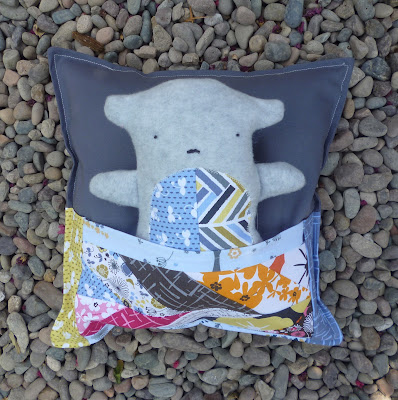 The idea of a pillowcase is a great one, but I know my kids...five minutes of trying to sleep with Mr. Bear right next to their heads, and someone would have been complaining about it. So I used 12" x 12" squares of Kona coal to make a little pillow so that he gets a bed of his own. The pocket was also 12" long, and I probably should have added another inch in length onto that -- it's a bit of squeeze to get him in there. At least this way I know he won't fall out easily when the girls tote him around the house. No piping on mine -- again, lack of time -- but I'd really love to try this with piping around the outside edge of the entire pillow.

All in all, this was a fun little set to make. This one is for my own sweet Bear. You should have seen her eyes light up when I first handed her the finished Mr. Bear. She immediately held him up to her cheek and squeezed him in a hug, her face just glowing with happiness.

And once again a project is worth every minute it took.

Linking up to the Zakka Along.
Posted by Heidi Staples at 3:54 PM 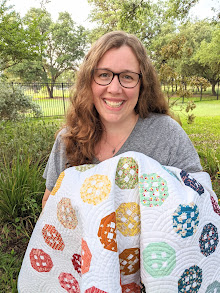